Here is a set of cards that we are going to make at the workshop this week. They are gift card size. I ran the background through the Big Shot (which I love) with the Dotted Swiss embossing plate. The white section is the Top Note die cut, cut in half. The fruit is colored with markers then stamped, and cut out. Then I just added an embellishment to give it a finished look.
I like the finished product, and I never have a card when I need it (don't ask) so these will be nice to have on hand. 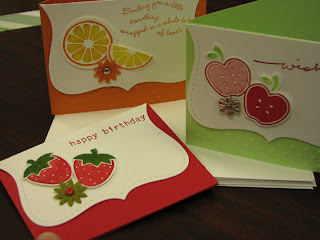 We are home from a great vacation. We started out in New Mexico and ended up in Mobile! The boys and I decided to write a trip review because we did a few off the beaten path things and wanted to share. Look for that to come.
My tennis team, the Fireballs, played in the state tennis tournament this past weekend. It was a huge learning experience for me, and I think the rest of the newbies that were on my team. We knew it was going to be hot, but I am not sure any of us were really ready for it. It wasn't even as hot as it usually is in Mobile!
I was so nervous playing the first match. Sometimes I get all jittery before I play. That wasn't even the case this first match. I was zoned out. I think I was so interested in what all was going on around me. The team we played took long breaks, which does nothing for my ADD mind. As a result, Rhonda and I got beat, 6-1, 6-4. This was the team to beat, and afterwards several people congratulated Rhonda and me for putting up such a fight.
Our next match was Friday morning. I took a by and played hostess to my team members who played hard. No one on our team should hang their heads. I hope we all remember this is the best of the teams from each of their cities- there are no easy teams to play!
I played again on Sat. afternoon with EmilyW. We struggle the first match then came back to win in the second 7-5. I think we both petered out in the heat and lost the tie breaker 10-5. I had nothing left at the end of the game! However, I was very pleased with the way we played.
The last match for our team was Sat. morning. The team we played was supposedly the best team at the tourny, and their average age was 20! Rhonda and I played again, and she was looking for a state win! I must admit that I really wanted to win one match, but was not confident. We played well, found our grove late in the first set, and lost the set 6-3. The second set was a different story, and we can from behind to a 7-5 win. The tie break was hard and nerve racking. All the others had finished playing and everyone was watching us battle it out with the cute girls from Tuscaloosa. Rhonda and I got behind, and I thought our nerves were going to get the best of us. We battled- I must say I was playing the best tennis of my life. We came back to win 13-10! A huge victory for the underdogs! I think I will enjoy that win for a long time.
State was a trip. It is hot, intense, nerve racking..., but in the end it is just tennis, and I am at home today with dirty dishes in the sink, laundry, and grass up to my knees (at both houses!). But I know I can tackle all that- cause I beat the youngies on the court and won a match at State!
Posted by dawn at 8:22 AM 1 comment: 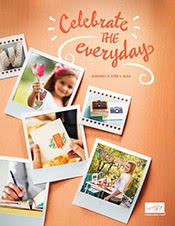 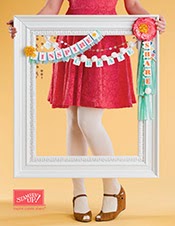 dawn
Huntsville, Al
Welcome to my little collection of projects, funny boy things, and rambling ideas. I am a Stampin'Up demonstrator so most of the cards you see here are made with Stampin'Up supplies.